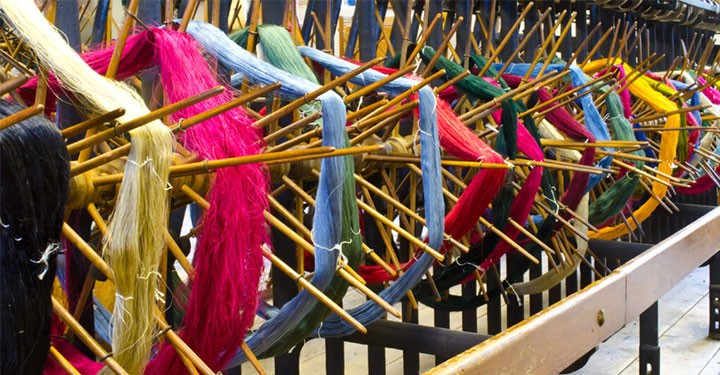 Things We Do To Strengthen Our Supply Chain

It’s Wednesday, early March, and I’m in Ho Chi Minh City, Vietnam. My first trip to Asia for business was to Taiwan, over 20 years ago before China became the world’s factory floor. Every trip after that was to China and only China until a few years ago when I started to go to India. It expanded to Vietnam and on this trip I skipped China all together because I was stopping in Cambodia too.

The day started with a visit to a large factory manufacturing woven PP bags, unfortunately not as fruitful as I had hoped. I was running on a tight schedule because I was flying to Cambodia in the early evening and I still had another factory to visit. I returned to the hotel with a few minutes to spare before the factory owner was scheduled to pick me up. The owner didn’t show up and instead sent his driver who didn’t speak any English.

I don’t expect that a Vietnamese should be expected to know my language, but this was one of those times when I really wish he knew some English. The plan was that I would be picked up at 1P, get to the factory at 2P, tour the factory and review pricing for 1 hour and then get back to the airport by 4P, giving me 2 hours to check in, go through immigration and security.

The driver was right on time and we left the hotel shortly after 1. It was a really hot day in Saigon and he had the A/C blasting. Actually, it sounded like it was blasting but there was almost no cool air coming out of any vents so I was pretty uncomfortable. About 30 minutes into the drive the car started to emit a pinging sound, at which point the driver started talking to himself. He sounded stressed out. A red light came on and the car engine died and we came to a stop in the middle of a busy road. When I say a busy road in Saigon, it’s a whole different universe to a busy street in NYC. There are so many different types of vehicles on the road all honking and flashing their lights at each other. But surrounding all this is a non-ending flow of mopeds that create a deafening din and, I’m sure terrible pollution. Imagine a fast flowing river and now imagine our car as a rock that is jutting out of the water with the mopeds going around us like flowing water and you get a sense of what it looked like.

The driver showed me his phone that said, “I will give you a few minutes?”. He opened his door and disappeared. I couldn’t take the heat inside the car and waded through the mopeds onto the sidewalk to get some shade. I had no idea what the problem was. About 15 minutes later the driver came back riding on the back of a moped with 3 plastic soda bottles filled with gasoline.

Yes, we had run out of gas.

He poured the gas in, using a bubble tea straw he picked up off the street to hold the valve open, and a few minutes later we were back on the road. I sat down thinking, “I hope that’s the last issue we have today” as a cockroach skittered down my leg.

Once we were finally out of Saigon center the traffic was flowing pretty fast. I had Skyped with the factory owner while the driver was getting gas and he told me that we should be able to get to his factory by around 2:30 so we now only had 30 minutes.

We were still on the road when it hit 2:30, at which point the car started to ping again, a red light came on again and we came to a stop. It wasn’t the gas this time, the engine had overheated. The driver once again disappeared without saying anything to me. 5 minutes later he came back riding a moped by himself.

Where did he borrow a moped so quickly?

He opened the trunk, put my suitcase on his lap and patted the seat behind him. It didn’t seem like I had much of a choice so I got on. He floored that moped for another 10 minutes to the factory with me in the back with no helmet. The driver did have a helmet and was nice enough to not buckle his chin strap so it fluttered and snapped on face for 10 full minutes. I was thinking that if I fell off this thing, I would definitely be dead but I so wish I had a photo of me sitting on this moped zooming down a forsaken Vietnamese road.

We got off the main road and was on a small road passing by shacks and forlorn fields and a random water buffalo and arrived at a building that looked ominous. It wasn’t unlike factories I used to visit in the early days of China production but it was so out of place and once they shut the gate, I could’ve had my organs harvested and no one would ever find me.

His wife greeted me and took me up to the second floor where owner was sitting in a chair. He lifted his hand like a royal waiting for me to kiss his hand but it turned out he was in too much pain to get up from injuring his back doing yoga the day before. 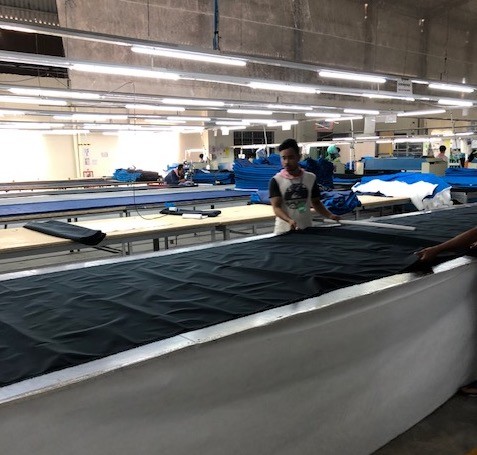 I looked at the factory floor where nothing was going on, and 10 minutes after I arrived, got in another car and went to the airport. The drive to his factory took 2 hours and 30 minutes and the drive to the airport took 1 hour. Once I got through immigration and security I had enough time for a quick bowl of Pho before boarding – as I hadn’t had anything to eat since 7A. I had such a sugar low and so hungry that I was slurping those noodles like a competitive eater but my hands were shaking like I was going through withdrawal symptoms.

The owner endured his pain and accompanied me to the airport and we had a chance to speak more. Surprisingly he had produced bags for some large and upscale grocery chains, among other brands.

This man and his wife built a business that supported his family, with 2 kids in a U.S. university, and his employees and many cottage industry households.

The connection we made in the car was worthwhile and, even though my trip there wasn’t easy, I may have made a valuable connection in Vietnam.

The Consequence of Tariffs

A Visit to our Factories in India

With a flair for style and working knowledge of current fashion trends, material availability and quality standards, CDP’s creative and production team are able to create a custom product that will help make your sales promotion a success.

Talk to Custom Direct Promotions about your next successful GWP program. By phone at 212.336.1560 or sung@customdirectpromo.com.

Sung Park, along with his wife and business partner, Annie Fan, own Custom Direct Promotions (CDP). CDP is a provider of high-quality GWP packaging solutions to optimize materials used and control costs for luxury brands.